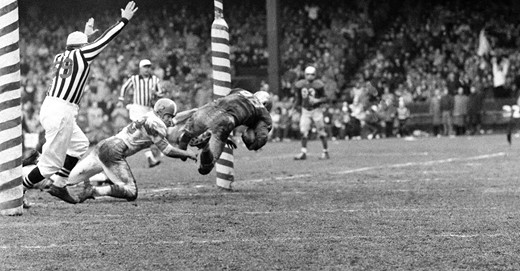 It’s been more than 60 years since the Detroit Lions won an NFL Championship. In the 50s, the Lions were one of the most dominant dynasties in the league, winning three championships in six years. It was a season of comebacks with their coach quitting weeks before the season and star QB Bobby Layne going down with a broken ankle. Their backup QB Tobin Rote would have to put the offense on his back, and he did: as they would go on to complete one of the greatest comebacks in NFL history against the 49ers before they trounced the Cleveland Browns in the championship game. We interview hall of fame linebacker Joe Schmidt, as well as Steve Junker, the rookie tight end who scored two touchdown’s in the championship game. We also talk with Lions beat writer Dave Birkett from the Detroit Free Press, and MSU professor Joanne Gerstner. Football analyst Jim Brandstatter takes us through the pages of Sports Illustrated and the Detroit newspapers from that year.